From Marginalized to Mainstream: How Dee Williams Challenges the Status Quo of Representation 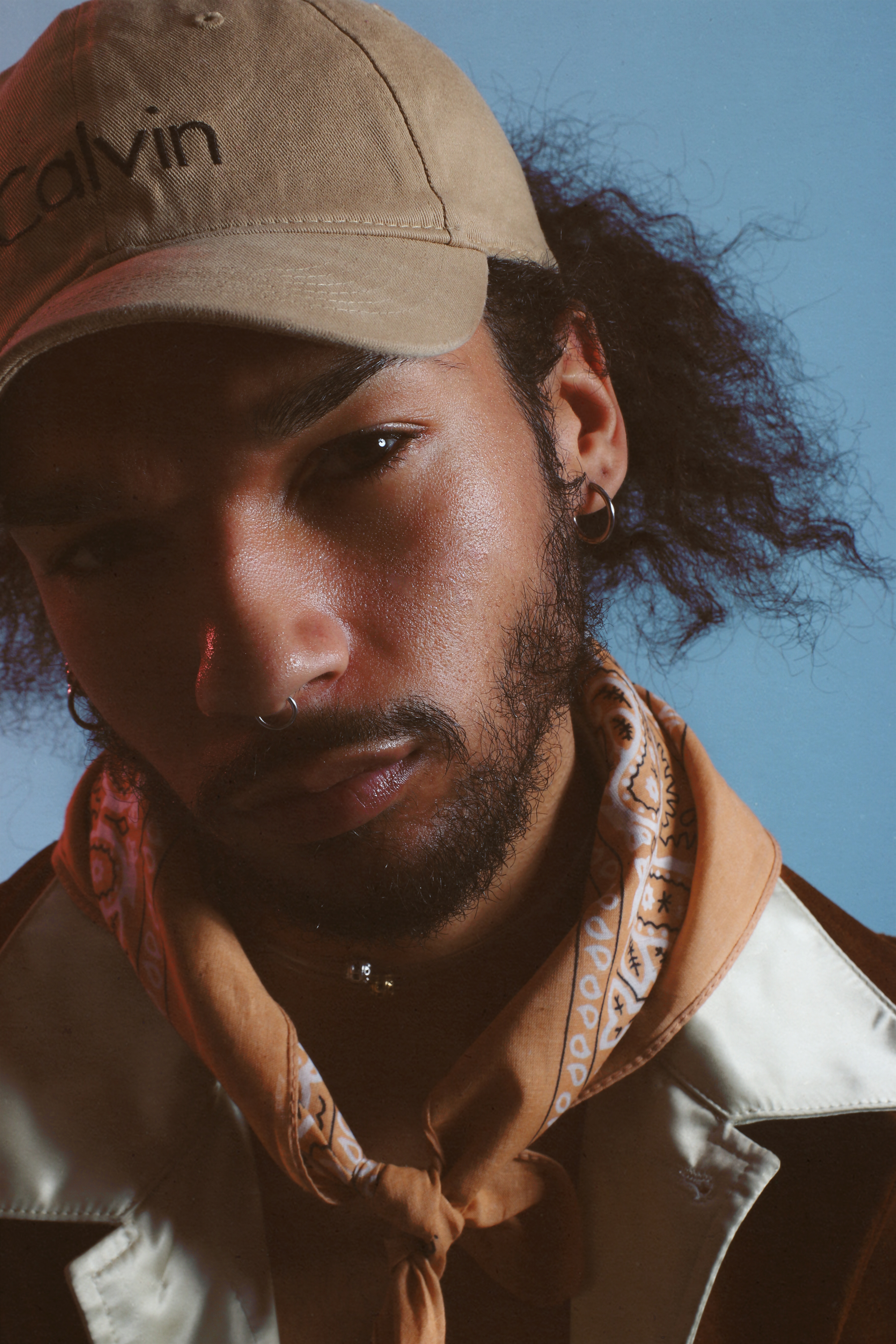 Although strides are being made in the realm of visibility, Dee Williams maintains there's still much to be done – above all when it comes to Black LGBTQ+ stories. In this guest post, the NYC-based photographer tells us how she channels her creativity to amplify marginalized voices and subvert conventional narratives.

My inspiration for photography comes from the lack of diverse images from marginalized groups. The imagery within the entertainment, media and the photography world is still heavily dominated by able-bodied, cis-gendered white people. So, I feel that my calling is to use my talents to create imagery that not only challenges the status quo, but also amplifies voices and narratives that are so often brushed to the side. Narratives that are only recognized when theygoviral or profit can be made.

There has been a recent rise in the storytelling of the LGBTQI+ community, but I still feel that Black stories are being documented few and far between. My best friend Ashley Perkins is heavily invested in the Black LGBTQI+ community in NYC and has a podcast (called Perky Perspectives) that gives voice to our stories. I reached out to her to see if she knew of anyone I could shoot for my series. It was magic from there and I can’t wait to continue amplifying Black LGBTQI+ voices. 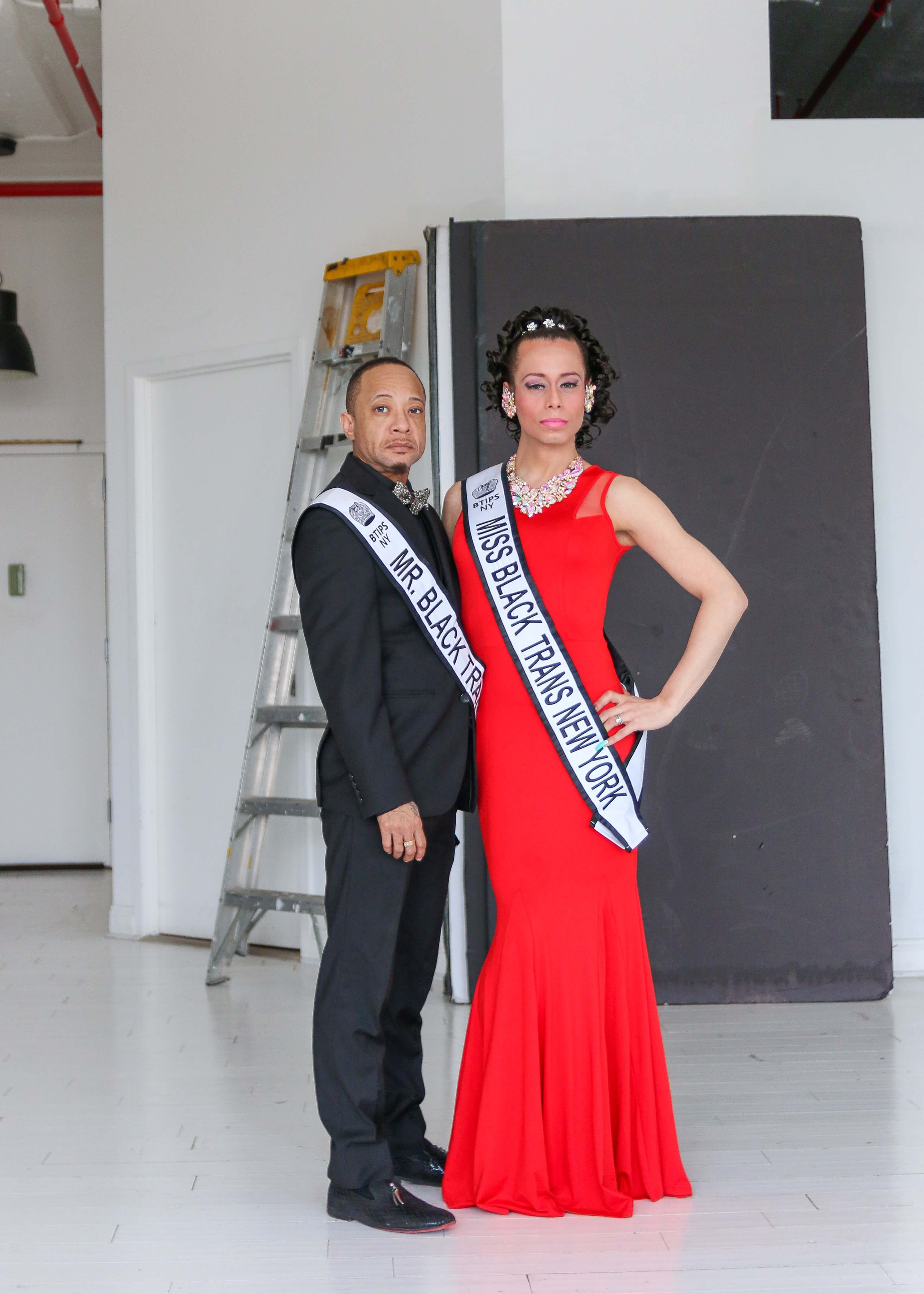 The interviews that follow are just three of those unique perspectives.

Meet married couple and activists Princess Lailani and King Lucky Soulja, who are members of The House of Soulja and New York’s Mr. and Miss Black Trans 2017-2018. As a spokesperson for the HIV Stops With Me campaign, Princess Leilani is an advocate for HIV and Aids prevention and retention, as well as the provision of housing for those in need. King Lucky focuses on health, policy, procedure and parenting campaigns. 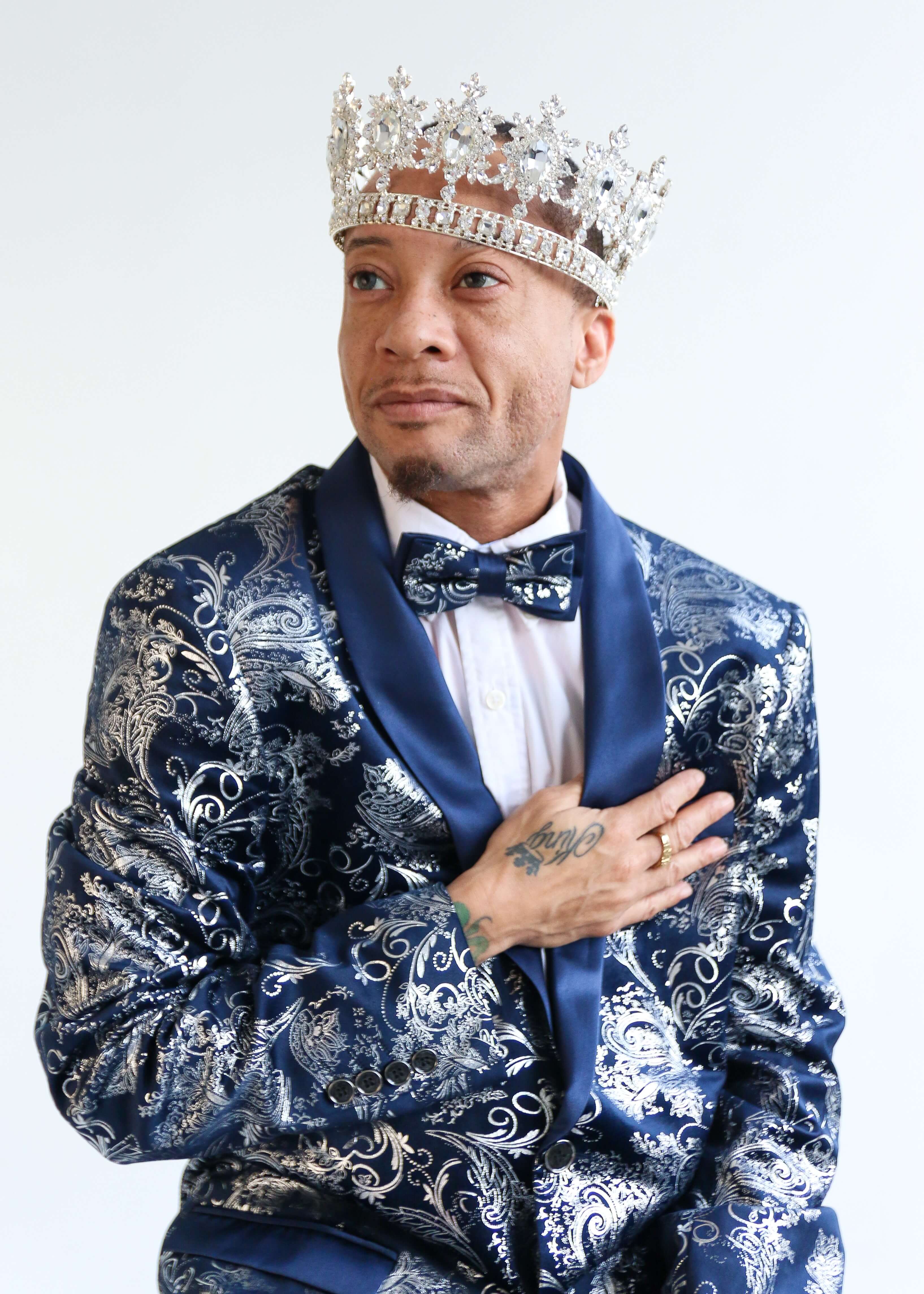 When did you start to feel something was different? When were you able to fully show what you were feeling?

Lucky: I’ve always known something was different. I started vocalizing it around the age of four, really really strong. I’m 46, I’m a 70s baby, so at the time it wasn’t heard of. You didn’t see it. So it was like, “you can’t say that, you gotta be quiet.” It was like an embarrassment to the family. When I really found out that I was able to transition, that was very very late, I transitioned at the age of 39.

Lailani: I really didn’t vocalize it much. Transitioning was around me. The area where I grew up in, the South Bronx, I saw it a lot. I saw women of trans experience within my whole area struggling to get hormones. For me, it was something everywhere, all around me. I lived a very sheltered life until I was 14. But I knew what trans was, I knew of surgeries. At that time we didn’t have the benefits we have now though. I didn’t transition socially until I was 28, but I medically transitioned at 27. 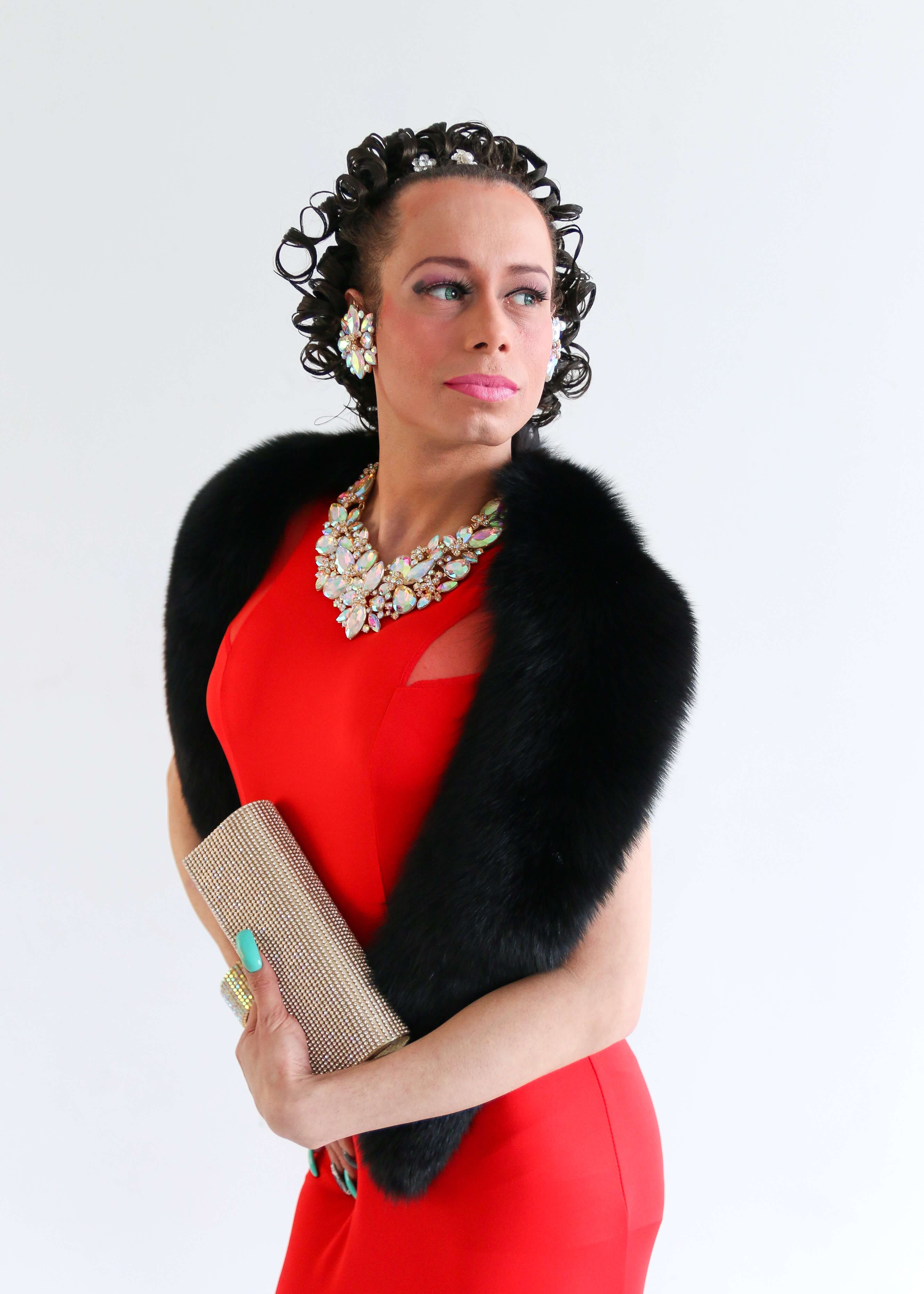 Can you explain the start of the medical transition for you?

Lailani: With my transition, I knew what I wanted to do because I knew about transitioning. I knew that I had to see a therapist. I was the slick educated one, so instead of telling my doctor I want to transition, and my doctor telling me “you gotta take this and you gotta take this,” I went through the back end. So I started seeing a therapist for a year and told her that I wanted to transition and get on hormones. For a whole year, I did that.

So one day I went to my doctor’s office, we had my regular visit. He gave me my lab results and I told him “by the way I want to get on hormones, I need this milligram, I need this kind of blockers”. I already knew the medications, the strengths, the dosages and everything.

Lucky: To hear that I was actually able to transition opened up a new world for me. My ex referred me to a medical facility in Manhattan (Callen-Lorde). I had met with some people at Callen-Lorde and a psychiatrist. They told me that it was possible and that I was able to start the testosterone. Then from there, I was on the internet looking for doctors. At the time, there was only one popular doctor that everyone was going to in Florida. My whole focus was, “I gotta get it done, I gotta get it done” (top surgery). Everything happened very quickly. I remember when I got my surgery done, I got it done out here at NYU. 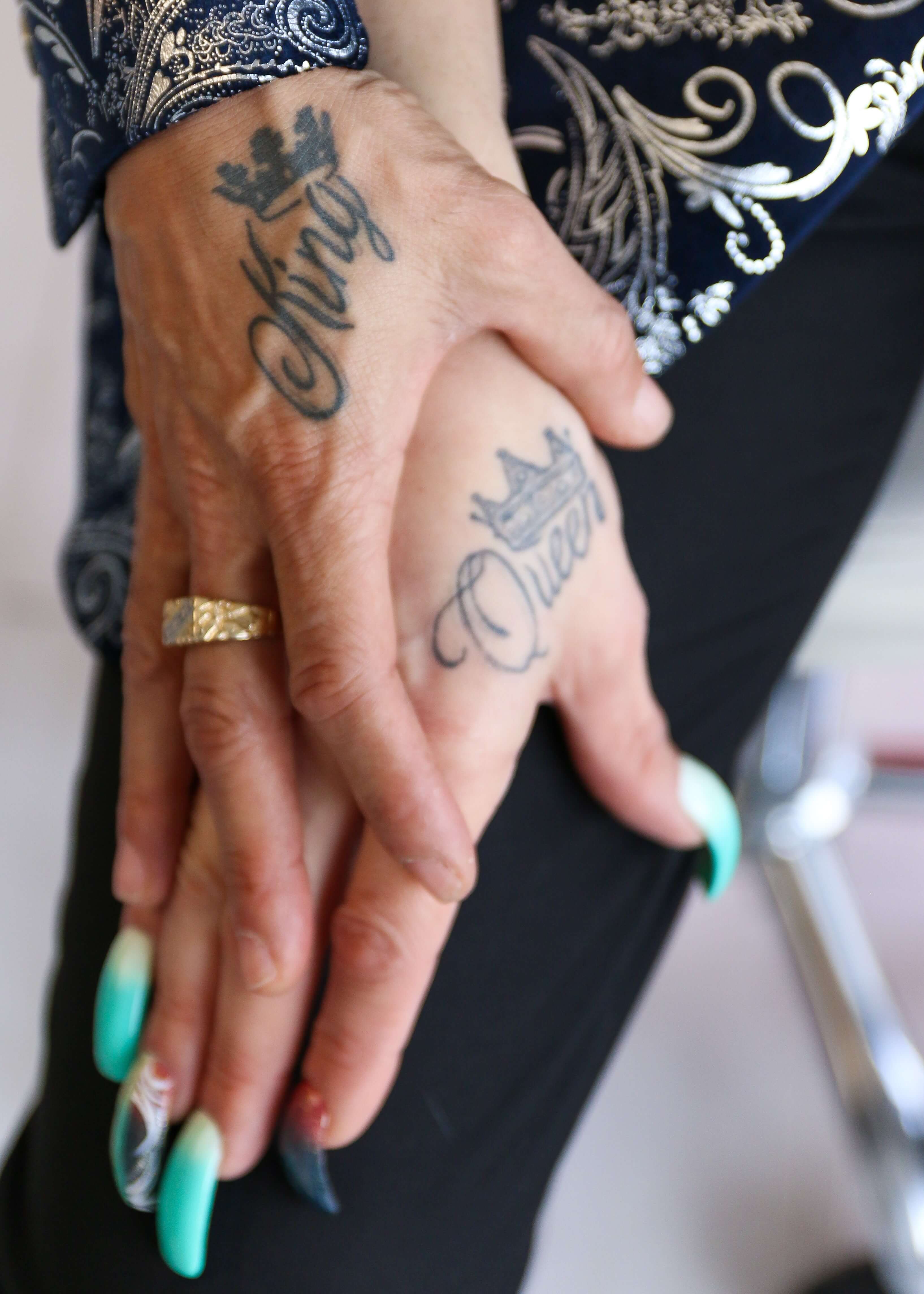 What are the next steps you are going to take in your relationship?

Lailani: We are a couple of Trans experience, which means we both identify as Transgender. My husband is Trans masculine and I am Trans feminine. The whole misconception out there is that “oh that’s a gay couple”. The reality of it is, we are a cis-gendered couple. We identify as heterosexual and we have chosen to be together because we love each other.

We have come to the decision the to get off hormones. For me, my estrogen and my testosterone blockers and for my husband, his testosterone and estrogen blockers. We are in the process of trying to have a baby. 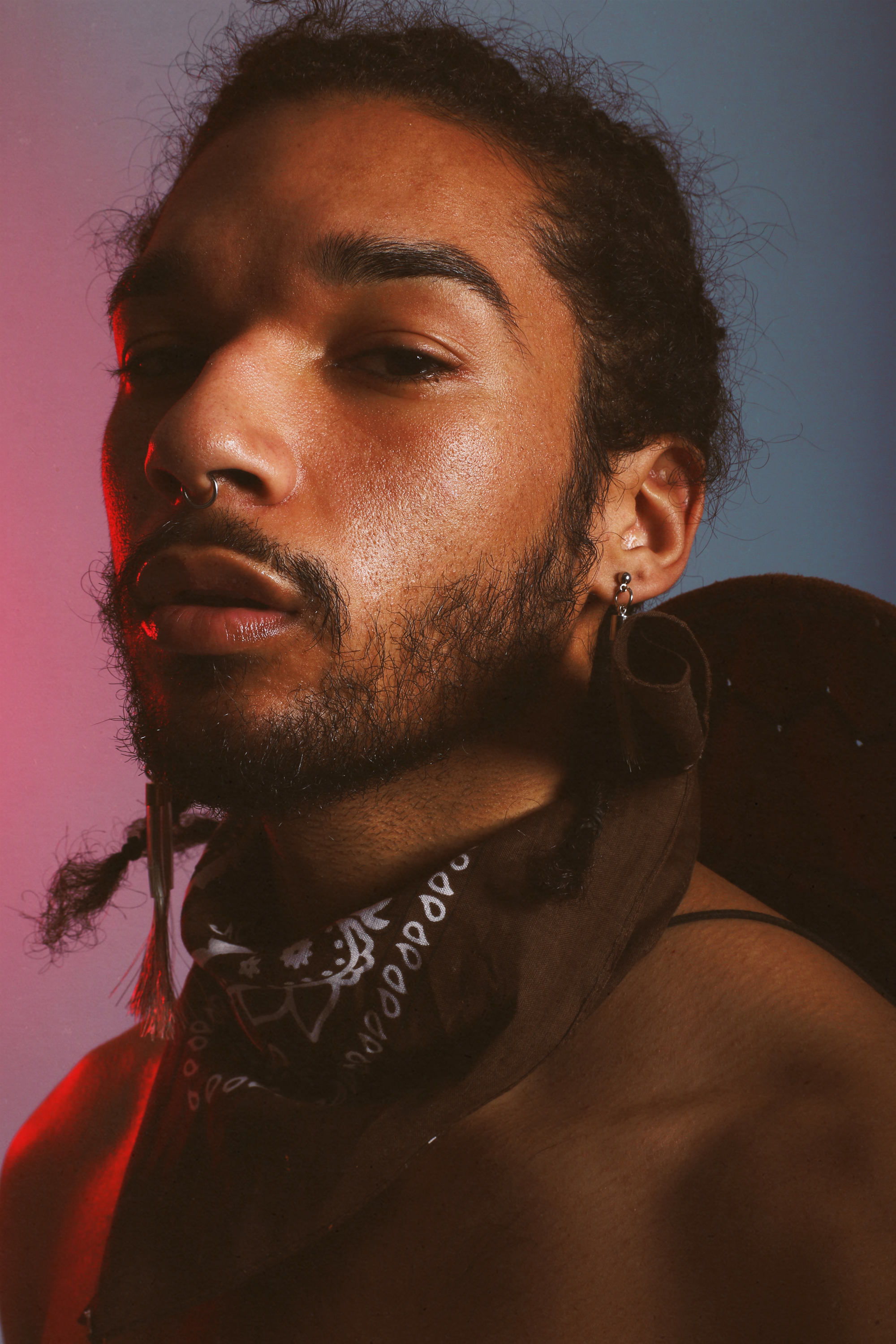 When was the moment you knew you were gay? What was your initial reaction to this discovery?

I’ve known I was gay ever since I was given the vocabulary for it. It wasn’t a pleasant feeling because my first, and for a very long time, my only, association with gayness or queerness in any sense, was negative. It was a big part of who I was as a person and it hurt to have to hold it in for almost 21 years of my life.

Did you accept it immediately or did it take time to come out to family and friends?

I came out to my parents the summer before my 21st birthday. It wasn’t easy to accept because there was so much around me telling me that wasn’t a way to be. The few openly gay men I did know of, I envied. What a joy to be able to be yourself, to be able to express yourself as you wish to, regardless of what people are going it think about it. 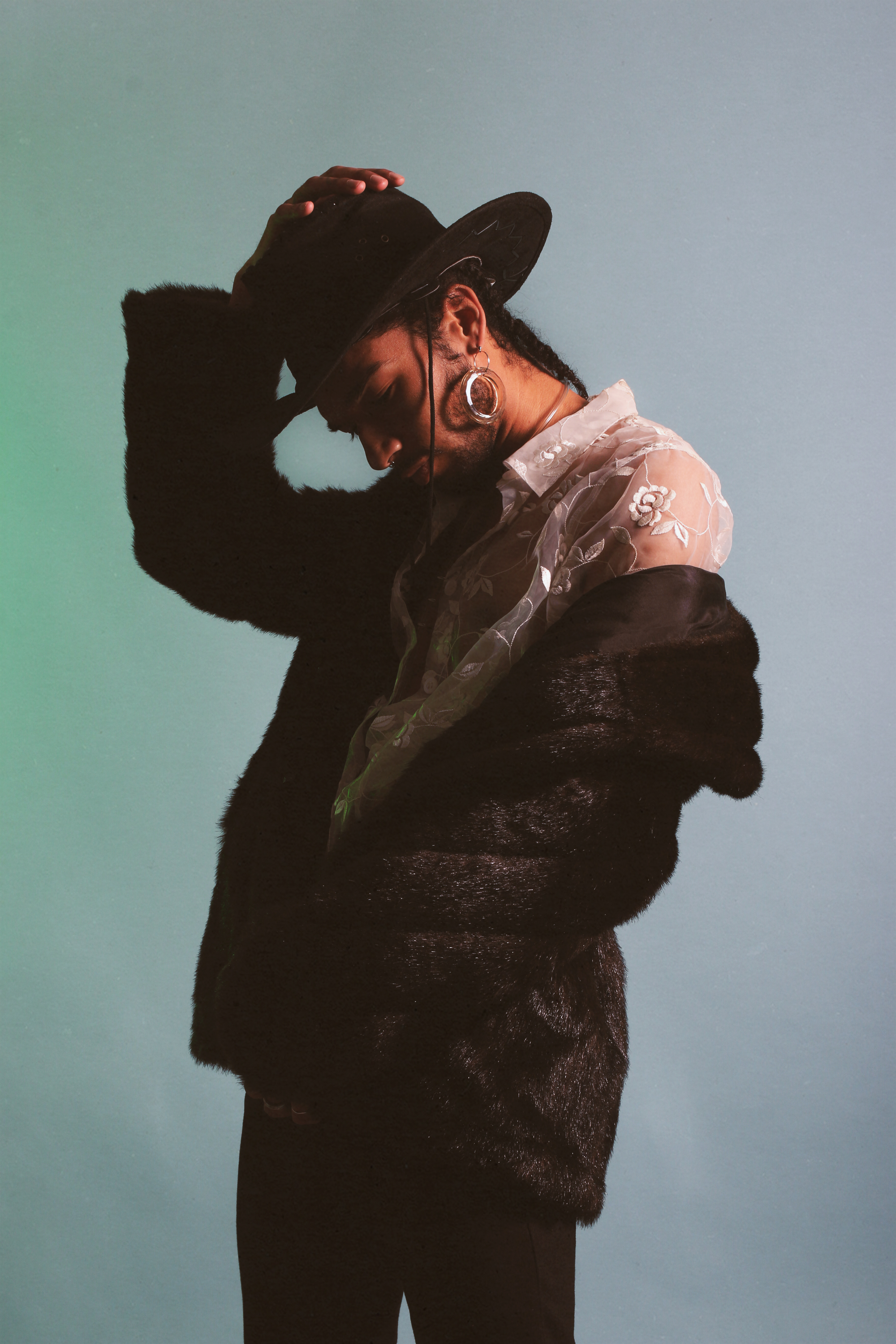 Growing up in a rural area how was it being a black gay man in that space? How do you think it affected you?

It definitely wasn’t the safest feeling. Black men in my hometown don’t know much better than what they were taught. For me to disrupt that in middle school or in high school, I just did not have the confidence or strength to do that. It took me until I moved to New York to be able to defend myself and really teach folks from my hometown and beyond how they need to love me in order to remain in my life. Before that point, I had gone through so many low points where I felt so alone, different, unloved and shame took up so much of my time and energy.

“There are millions of young people on the LGBTQ+ spectrum who have never even met an openly queer person in real life.”

What advice would you give young kids struggling with their sexuality?

I’d tell kids to try their damndest to find places where they feel safe. And if they cannot find them, to create them. There are millions of young people on the LGBTQ+ spectrum or not who have never even met an openly queer person in real life. I didn’t meet my first gay adult until I got to college and sometimes it takes that. 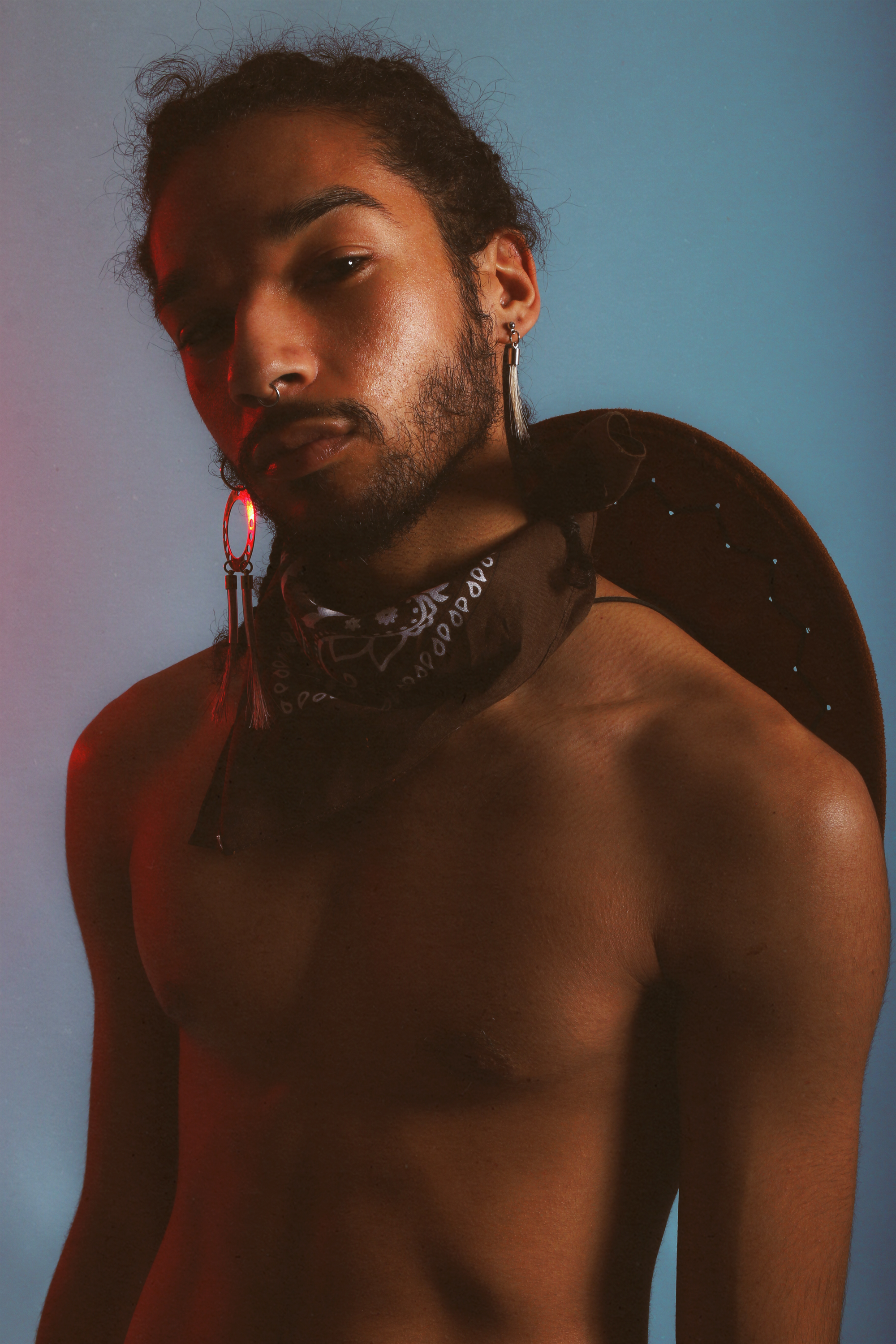 As a teacher at a middle school, I make it my number one mission to be completely transparent with them. I let them know I am gay, I shop for jewelry in the women’s section, I have a boyfriend, etc. It is hard to struggle with any kind of identity, but especially to do it alone and not to be able to openly express yourselves in the way that you’d like to.

“It’s hard to struggle with any kind of identity, but especially to do it alone.” 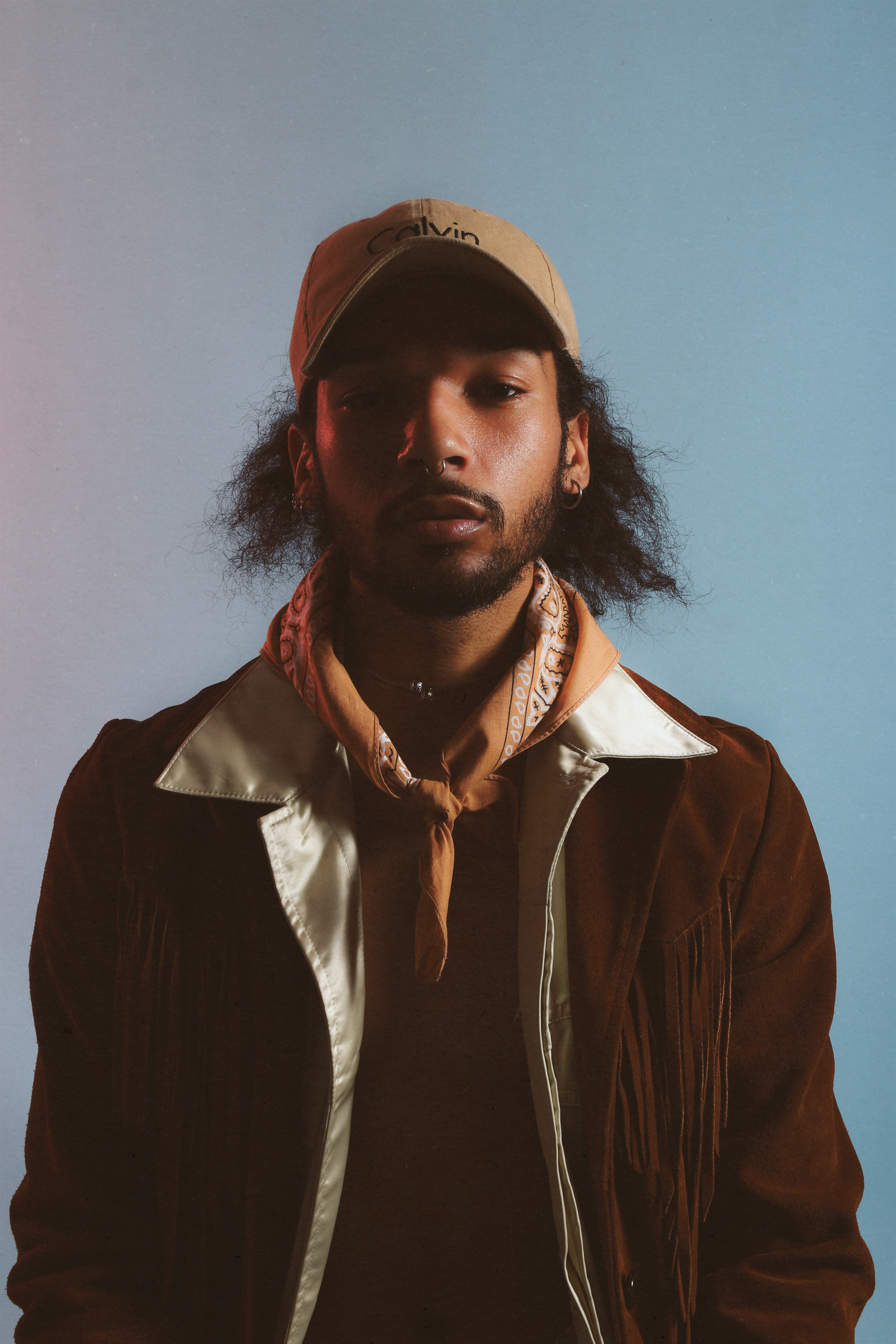 So many kids don’t even have the change to explore who they might be because we are already told what is wrong and what we can’t be. So definitely try to find your safe space to explore colors, light, senses of humor, the kind of shows you like, the books you like, the art, the people you want to be around, which ways it feels to naturally hold your arms, or yourself, exploring softness, etc. People who aren’t sure of themselves are very defensive, and if kids can find a place, at least one place for now, where they can put their guard down, so many doors to happiness and understanding will be opened to them.

This guest post was written as part of #NotYourCliche, our movement away from antiquated stock stereotypes and towards a more relevant, inclusive, representative view of global culture and society. You can see more of Dee’s work on her EyeEm profile, website, or browse her Instagram feed too.