From the Street: Many are Called 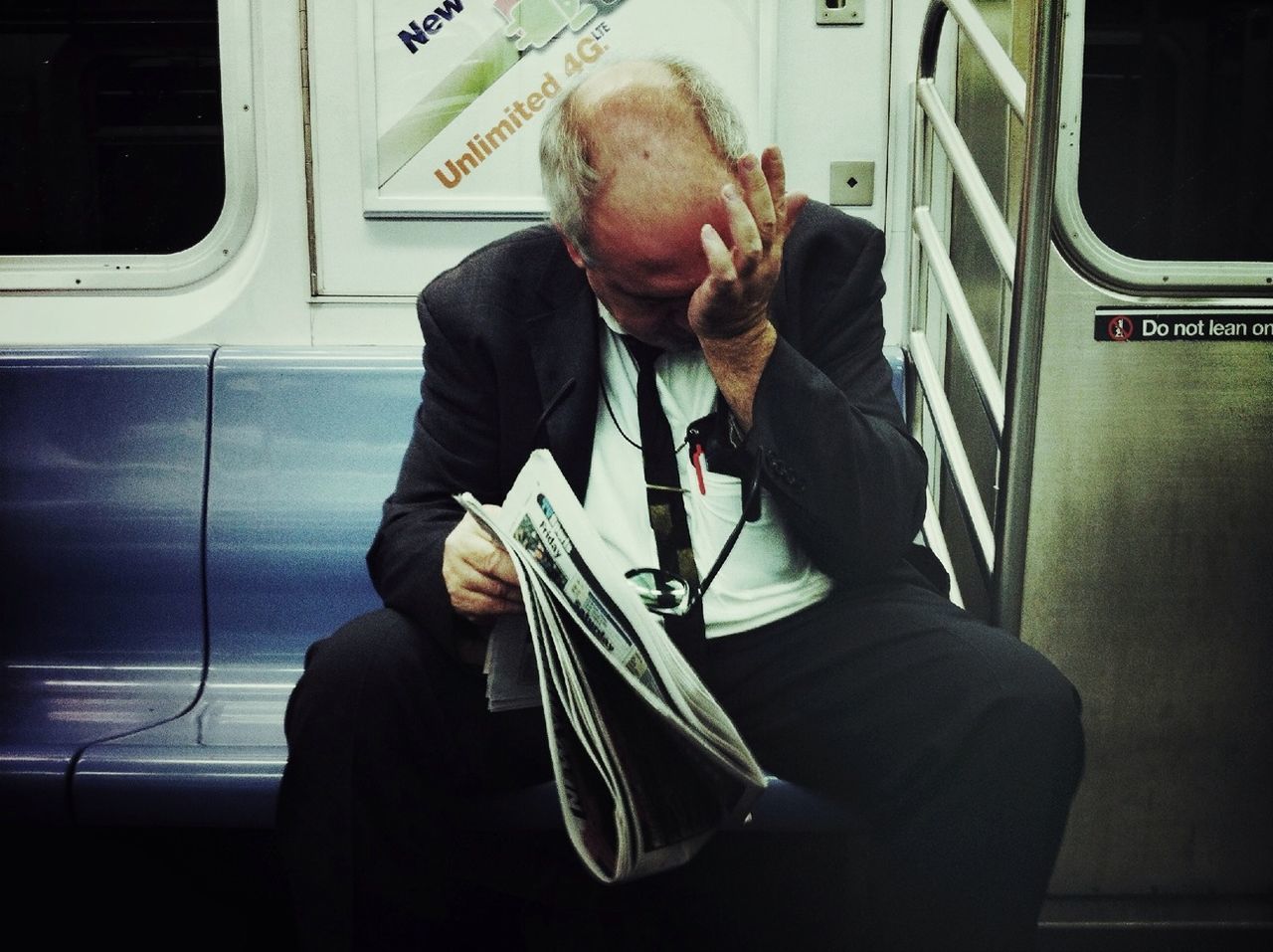 Each month, our friend Misho Baranovic is going to delve into the streetphotography album on EyeEm, searching for the stories behind the photographs.

Each month, our friendMisho Baranovicis going to delve into thestreetphotographyalbum on EyeEm, searching for the stories behind the photographs.

streetphotography in Borough of Bronx by Jordan Cortese on EyeEm

For this second installment of our EyeEm “From the Street” series I was looking through the EyeEm Street Photography album and quickly noticed a recurring theme of strangers on public transport.

This type of street photography is synonymous with Walker Evans, who, along with writer James Agee, collaborated on a three year study of the New York Subway system in the late 1930’s. The resulting book, published almost 30 years later, was titled “Many Are Called”. The portraits from this series are deeply personal insights into the daily lives of people going about their business in a New York from generations ago.

I found three photos in the Street Photography album that reminded me of the intimacy of Evans’ work. I was fascinated to see that almost 80 years after his series that mobile street photographers were continuing their exploration of daily commuter life.

These three images are all strong photographs, capturing their subjects in different states of reflection, some are wistful, others are pained – but all are beautiful.

I’ve interviewed the three photographers behind the images to find out why and how they took the photos. I’ve also asked them whether they felt nervous taking the photos due to the close proximity of the subjects and personal nature of the images.

streetphotography by Roger Clay on EyeEm

I am a 41 years old and live in the Inland Empire of Southern California. I am currently employed with the Department of Corrections for the state of California and took up photography as a hobby with my iPhone almost two years ago. I have been hooked on Street Photography for almost a year now after a friend introduced it to me.

This photograph was taken on September 18th 2012 . On the corner of Broadway and 5th Street in Downtown Los Angeles.

I saw this beautiful woman about a block away in front of a bus stop. The sun light reflecting off the buildings from across the street had lit her face almost perfectly. I walked up in front of her and got three photos. Her attention was towards two older gentleman having an argument to her right. Her bus arrived and she left. In some cases I believe there is no story needed in street photography. Just a beautiful woman waiting for a bus is good enough for me.

In this case I didn’t get nervous at all, I may have kept an eye on the two fellows arguing but in retrospect they probably helped me get the shot.

streetphotography in Borough of Bronx by Jordan Cortese on EyeEm

My name is Jordan Cortese (Miles is my middle name) and I’m currently finishing my studies in Media Communications here in NYC. I’ve lived here in the city all my life and I have a deep love and appreciation for it. Besides still photography I also have a love for filmmaking, working as a Director/DP for a bunch of projects particularly documentaries which probably somehow translates to my photography. I’ve taken photos as far back as I can remember. Growing up there was always a camera in my house and I always remember asking my dad if I could use his here and there. I work and study in Manhattan so there’s no avoiding the streets but in that time I’ve developed and appreciation for documenting what happens on the street whether it be through action or people.

This photo was taken not too long ago on my commute to school on the 6 train in the Bronx. I spend a lot of time on the train traveling so a good chunk of my photos are of the subways.

That’s an interesting question and something I’ve been thinking about recently. This question of why did I take the shot. Sitting across from people on the train all the time is always interesting because it becomes a moment of character study. You could either tune out with your headphones but I think people honestly sit across from someone, look at them and begin to analyze, wonder, study etc. If you look long enough and observe you can discover a lot about an individual just in their mannerisms, their attire and you start to put a story together in your head of that person. I don’t know them at all so the photograph then becomes the personal realization of how I see them, what I interpret of them, and ultimately the story I give of them. But in all that I’m discovering there’s something else about the scene or photograph that I’m trying to capture.

Something I can’t necessarily put into words at the moment but I think everyone does go for. Really we all have something to say but we just happen to use a camera to communicate it. I took about 15 frames of this guy and chose this one because it communicates a moment that I saw. The man just looked beat the entire ride and his body language just told so much about his day as he was huffing and puffing the entire train ride. I just sat across and kept snapping till I got that one act that said it all and it was this one.

I wasn’t nervous taking this photo, but then again shooting with a mobile device makes the job a lot easier since its silent. But still doing any photography on the street can be nervous at moments depending on the situation. Whether it’s with a DSLR or an iPhone there’s still a level of boldness that you got to develop.

streetphotography at Museum Station (Concourse) by alex on EyeEm

Hi, my name is Alex Fung (@librarymook) and I am from Sydney, Australia. I started taking street photos when I moved to Japan in 2007 for study and work. My circle of Japanese friends introduced me to Lomography and so began my love for shooting with film and capturing the unexpected and candid moments of daily life. When I returned to Sydney in 2009 for postgraduate studies, the cost of buying and processing film was a bit too expensive for me, so I switched to shooting with my iPhone.

Two apps I feel best replicate the simplicity of shooting with the Lomo LC-A are Hipstamatic and ProCamera. Most of my mobile photography has been shot in black and white with Hipstamatic. The simplicity of this app allows me to shoot in a way that is spontaneous and up-close. More recently, I’ve begun shooting in colour with ProCamera (it’s hard to shoot colour with a digital camera once you’ve shot film!). With this app, I can zone-focus like the LC-A, but there is also the feature of controlling exposure.

This photo was taken at the beginning of March this year when Sydney experienced its heaviest rainfall in recent times. I was travelling on a bus that was stuck in heavy traffic as a result of the rainfall.
Why did you take the photo? What did you find interesting about the scene?

I took the photo because I saw something interesting and the light was good. As the bus travelled along the street, light between the buildings hit the droplets on the window, creating a nice glistening effect and a partial silhouette of the commuter diagonally to me. That appealed to me.

No, I didn’t feel nervous taking the photo. A mobile phone is relatively small and unobtrusive compared to a DSLR, so that really assisted in capturing a nice candid moment in a matter of seconds without raising alarm amongst the other commuters. I trusted my instinct and pressed the shutter when the moment presented itself.