At the Border: Dávid Balogh’s Dramatic Images of the Syrian Refugee Crisis 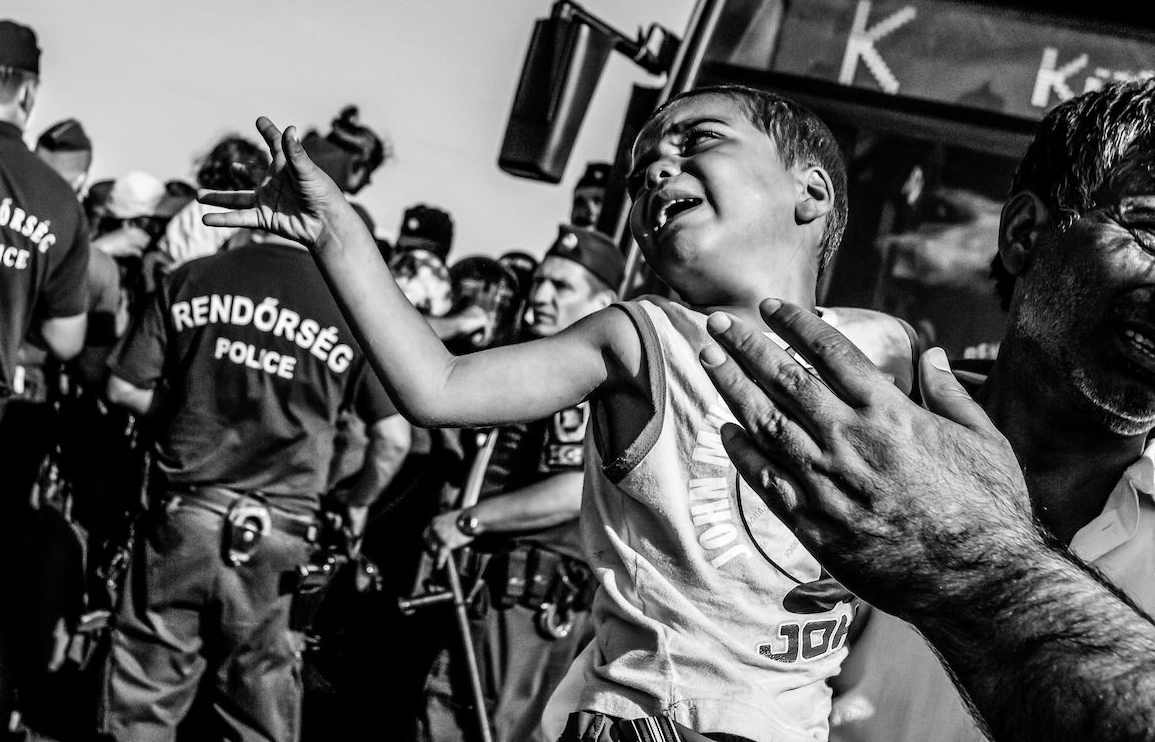 A native Hungarian captures incredible events as they unfold

Dávid hails from Budapest, Hungary and has spent years photographing in his native country, now reporting for a Hungarian news agency. It was at 8 years old that Dávid Balogh picked up his first camera and shot a stunning capture of a swimmer mid-air – an image that shows his talent was years ahead of his time.

Dávid shares, “This photo hangs on my wall to this day. Every morning, I wake up wanting to create something strong, something lasting.” During September 2015, the world watched as the Syrian crisis peaked in Hungary. During this time, the border between Hungary and Serbia opened. Dávid was there and documented a dramatic unraveling of events. We asked him about his work and about his experiencing documenting this crisis.

Recently, you’ve shared photos of the refugee crisis. Tell us how you ended up photographing at the Hungarian border.

My father has worked for Reuters for a very long time, and he advised that I try and apply for a photographer position here while the migration crisis was very intense. I took his advice and applied and had a chance to work as primarily a Chilean cameraman for Reuters TV.

My task here varied. From helping him with carrying the heavy equipment (and of course mine as well) to translating for him to English whenever the Hungarian police officers asked us questions or didn’t want to let us too close to the most vivid happenings, it really helped a lot being from this country and just speaking the language. I later realized that not only was it a key to have the Hungarian language, but possibly just being able to respect the police’s work and at the same time get their permission to shoot in zones where foreign press wasn’t always allowed in. I also enjoyed greatly being able to do some serious work myself, once the cameraman’s equipment was in place. A couple of my photos were published on Reuters’s main website.

What exactly was happening in these photos? Can you tell us the story?

In these pictures, the green border between the Serbian-Hungarian border was temporarily open and refugees just kept coming. 5-10 thousand people daily, in hopes of a better future…

What is the green border exactly? Do you know how long that border was open?

The green border is was an unofficial term used my Hungarian media regarding the temporarily opened migrant crossing point at Röszke, between Serbia and Hungary. They closed the border at Horgos (another crossing point 15 minutes drive to Röszke) from the Serbian side September 15th 2015 as well.

Did the drama of the events affect how you photograph? What was this like for you?

Seeing the people, so tired, so sad most of them, after literally having walked thousands of kilometers with little children, women and elderly, it really hurt me seeing this. But I still tried to focus on what I was there for and tried to do my best capturing the moment. I tried to stay politically on neither side, and just do my job.

Do you know what happened to the people you photographed? Where are they now?

All I know about these people is that they entered Hungary, were all carefully registered, fingerprinted, photographed, passports checked, then transported by busses and trains towards the Austrian border point Hegyeshalom… I did not get into such close contact with any of them as to change email addresses or phone numbers, so I have no real follow-up on any of them. I assume some of them were accepted as asylum seekers into Germany or some other Northern European country, some sent back to where they came from possibly… just the general information we all know.

What do you photograph? Would you call yourself a documentary photographer?

Whenever I possibly can I work in the field. I definitely would have to say I an an outdoorsy person in general, and the type that is not primarily fond or portrait and really “set-up” photography. Of course, it is very important to learn to do that professionally as well, but it doesn’t motivate me nearly as much as field-work.

What’s your advice for photographers who are interested in photographing current events or even just people in everyday life?

My recommendation to new and upcoming photographers is to always stay positive, never give up just because you don’t get the shot of your life. Keep being there, everywhere early, and follow the political situation in the place you live/seek to live and work in.

Who are three photographers you recommend we follow on EyeEm?

There are so many good ones. But I’ll try.

I like @Hommali‘s work, who captures specific atmosphere and happenings.

And I’d like to congratulate the work of photographers in this Untold Stories collection, this really touched me.

I would also like to mention genius @PorterYates‘ Tibetan pictures!

How does what you do full-time for work feed into your photography? Are they related?

I now work part-time for a Hungarian news agency, a printed news paper more specifically. Most of my work takes place within the country, but I seek the opportunities to work in foreign places as well.

What’s in your camera bag?

I covered the refugee-crisis with a Canon EOS 7D Mark II and have just recently invested in a Canon EOS-1D Mark III. I use Canon EF 16-35mm, Canon EF 100-400mm and Canon EF 24mm lenses. Of course I have all the typical supplementary gear as well.

Thank you to Dávid for sharing his story. Make sure to follow Dávid and see his work in EyeEm Magazine Vol. II. Find more stories from photographers on EyeEm here on the blog.