Interview with Image Editor Alan Taylor of The Atlantic Photo

We spoke with photo editor Alan Taylor about how he created a genre – and what looking at photos all day feels like.

Alan Taylor is an image editor at The Atlantic Photo, a site that showcases great and news-worthy photography from around the world. Previously, he set up Boston.com’s The Big Picture, where he pioneered large images in simple, scrollable galleries. The simplicity of the format aided the site in becoming one of the most popular photo blogs on the internet. We asked Alan how he approaches his job and what effect all the photos have had on his worldview. 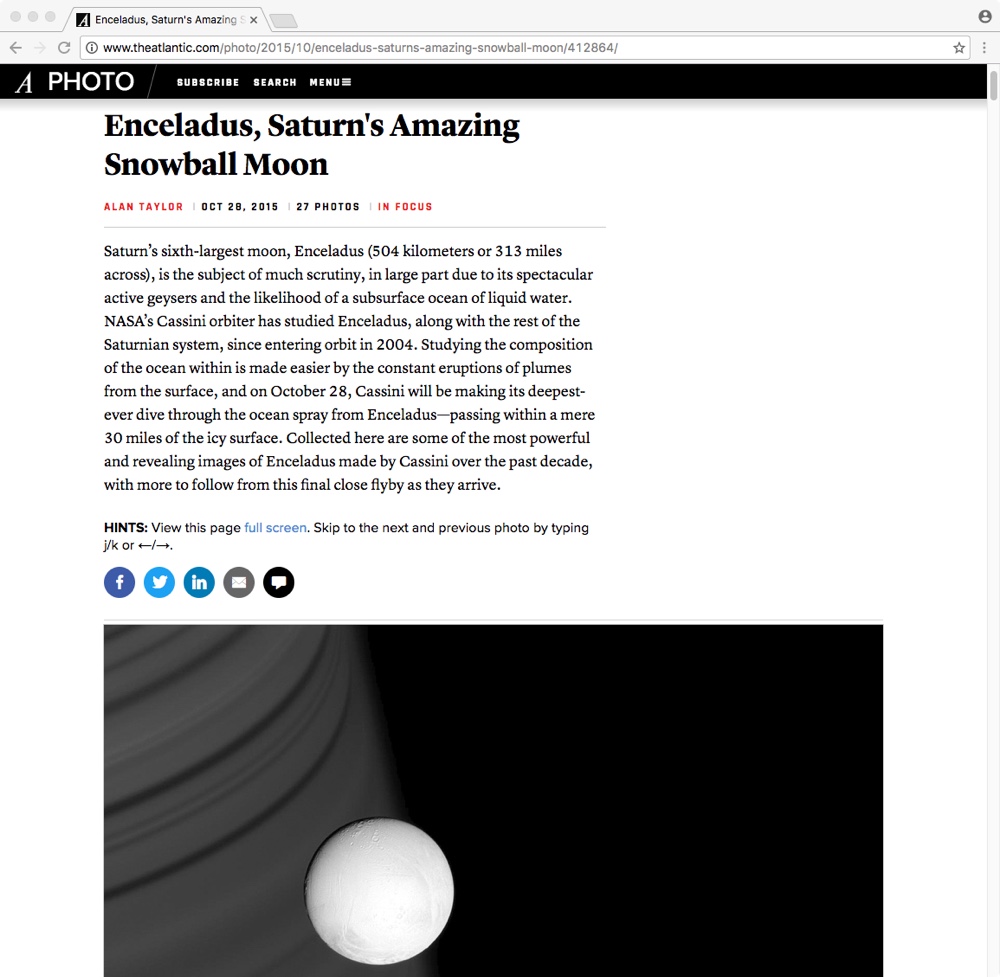 A screenshot of a gallery curated by Alan Taylor. See the post here.

EyeEm: WithThe Big Picture, you pioneered a format: A page with a list of large-scale images. Simple as that sounds, it was revolutionary at the time when there were only slideshows and small pictures…

Alan Taylor: The format was something I had only ever seen on travel forum posts: small paragraphs of text followed up my larger images. But it hadn’t been done in online magazines.

How did you come to implement it?

I was working at the Boston Globe as a web developer, specifically in their classifieds section. I had access to the paper’s library of agency photos, and thought they were amazing. So I began putting together little photo stories to share with my friends in a private forum. They said “You work for a newspaper – you should do this for everybody.” That started the process of me finding out who I could even ask permission to do that… 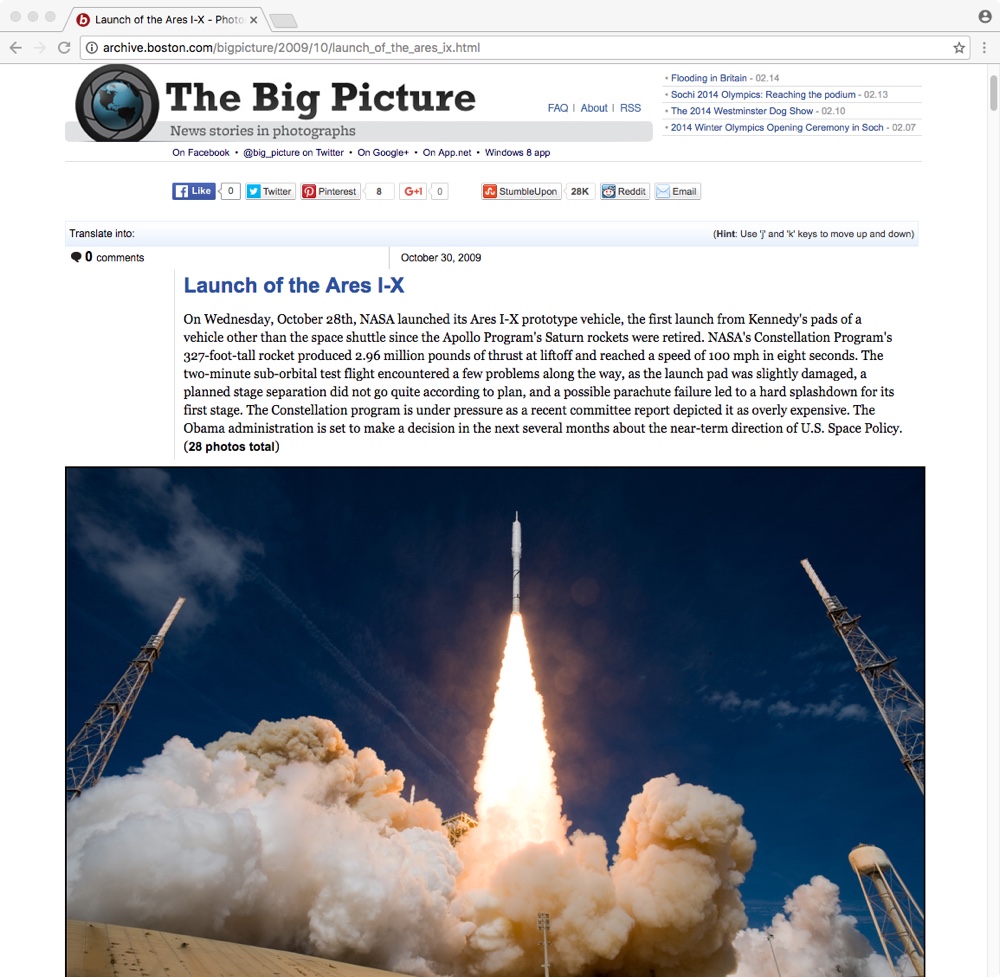 A screenshot of The Big Pictures, as it looked for many years. See it here.

Who did you talk to?

I didn’t really have any interaction with the editorial team at the time. But eventually I got in touch with the photo department and they told me to just give it a go. I was in the fortunate position of being a developer and having the keys to a lot of the website: Being able to build it all myself. This meant I didn’t have to go through a committee and figure out what it should look like.

“I am a fan of stories that make sense”

What was your background in photography?

I have no classic education in the field. But I’ve always been fascinated with photography: My mom raised me with lots of “National Geographic,” “Life” and “Time” magazines all over the house.

How does a trained engineer like you look at images?

My taste is informed by what I like: I am a big movie fan, so I love cinematic presentations. But also that background I mentioned: I was a big fan of how “Life” magazine presented photos with a certain progression, whether it was chronological or by moving through a color scheme, through shapes, forms, or compositions. I’m a fan of stories that make sense and that’s what I ultimately rely on: My sense of how things look and should be. Luckily, it tends to be the thing people like.

How do you construct your photo essays?

Most of the time from browsing around the archives and seeing what emerges. I look at thousands of photos every day and they get stored in my head. When I see something I like, it often reminds me of something I have seen earlier, triggering the idea for a series. I also pivot a lot: I may be telling a story about the commemoration for the Great Fire of London and it can turn into a story about modern art…

I figured you might have some long spreadsheet of notes, but a visual memory certainly does the job much more elegantly.

I’ve been doing this work for eight and a half years now, meaning that I’ve had my head in the visual firehose every day. I am wondering what it has done with my mental progress.

“It fascinates me which images become iconic”

Does it ever overwhelm you?

There’s a great phrase to describe how I deal with it: Continuous partial attention. People usually use that to describe being semi-tuned in to Twitter, Facebook, and email all day long. But I do the same with photos. I can’t just skim them because I wouldn’t internalize them like that. I also can’t look at all of them because then it would take ages. I just have to look and register anything important. I do it by excluding lots of things from the get-go: Pictures of politicians, sports photos…

It seems like you’re looking less for individual photos and more for a narrative among them.

It’s a little bit of both. If there’s an image that stands out, I will notice. But I am often confused when photos go viral that don’t do much for me visually. I can often see why it happens from a practical standpoint, but it might not hit me. Remember the picture of Alan Kurdi – I saw it and I thought it was an interesting image, but it wasn’t outside of the norm for what I had seen. I still see pictures of dead Syrian children every day. That this one became an iconic image is fascinating to me.

Do images still pack a punch for you or has the barrage of visual information made you accustomed to the violence and despair in photos?

In some sense, yes. I still kicks me hard sometimes. But you can only maintain outrage for so long. I should also explain how I see images: They are in reverse chronological order and all jumbled together, regardless of topic. Side by side I’ll see a picture of a royal, a picture of someone enjoying a swimming pool, three photos of mangled terrorist bodies, two photos of a politician, and then photos from an F1 racing track with girls dressed in tight clothes.

“I am a terrible photographer myself”

Is it hard to decide what you should leave out?

I like doing my “Photos of the Week,” in which I try to reflect the diversity as best as I can. Every week, crazy things are happening all over the world and I try and do five photos a day from just everywhere.

Have you ever found topics that were hard to do justice to through photography?

Lots of them! Right now, we’re doing a series about the modern workplace. The way people work today, compared to 50 or 100 years ago, has changed dramatically. But it is very difficult to examine it visually. At other times photos also don’t work, making me feel guilty if I show them.

What do you mean?

If a hurricane hits a small, underdeveloped country, there’s not a lot huge amount of difference in thethenand thenow. If you have only huts built on a shoreline, made of rough sticks and mats of grass and they get knocked flat, it doesn’t have a big visual impact – although it has a huge impact on the lives of the people there.

Yes, pictures can minimize the impact. I also want to emphasize how much I rely on the photographers and journalists in the field. I am a terrible photographer myself, eternally frustrated by this little device to make it do what I want it to do. So I have utmost respect for people who are good at it, who take photos in high-pressure situations. I am definitely working on top of everybody’s great work.

Do you notice certain trends emerging among photographers? In the way they shoot or see the world?

The first things that comes to mind is hard and heavy vignetting. That was briefly in vogue five to six years ago and has dropped away. I am glad HDR is not making it into journalism, every time I see it I am just appalled. I am a bit baffled by the success of mobile, by Instagram: Obviously I like the pictures big and beautiful and there’s just no way on a little photo to see them big and beautiful. And if you restrict your platform to only that shape and size, it feels like you’re missing out on so much. Many Instagram photos are great, but quality just isn’t there to show them in large sizes. I want to give the photos as big of a stage as possible and to tell a story with the most detail possible.