How Anna Liminowicz Photographed One Couple's Fight Against Homophobia 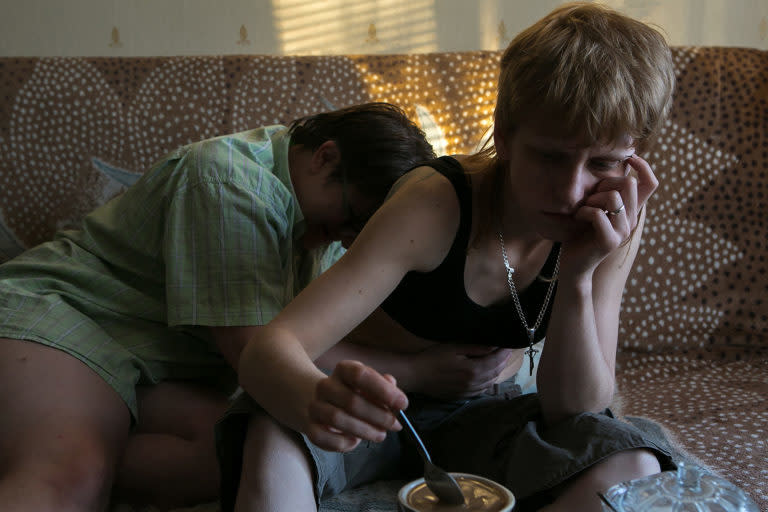 With the ongoing questions of displacement and uncertainty, award-winning photographer Anna Liminowicz highlights how outstanding photography can tell modern love stories, with her portrait photography project 'Between the Blocks'.

A visual project that began with a simple afternoon nap, has been nurtured into a visual masterpiece.

Anna Liminowicz, captures the honest and heartwarming story of a couple who moved from Poland to the United Kingdom in the hope of finding acceptance and a place they can call their own. We spoke to Anna to find out the highs and lows of working on Between the Blocks – an emotive and unique photography project. 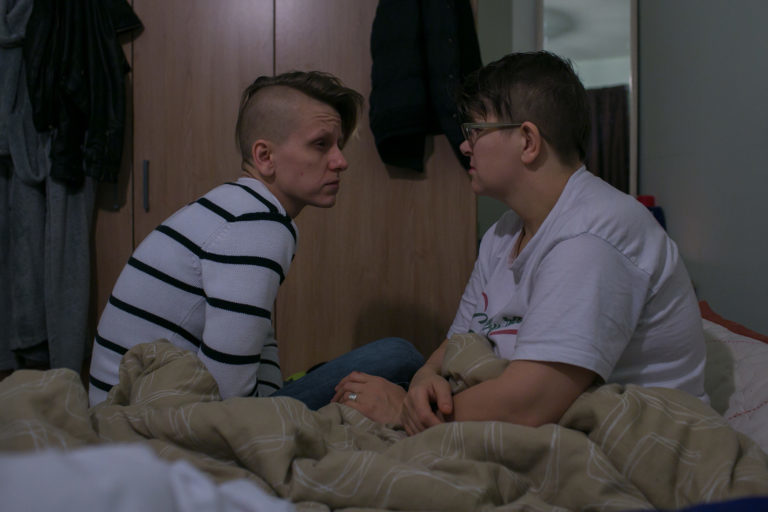 What was it that attracted you to the family? And how did this influence the way you approached the project?

Attracted me? Amazed me! They are direct, live without masks, and don’t ‘create’ themselves into something they are not.

When I first met them in 2013, I was studying press photography at the University of Warsaw in Poland. My group got a homework assignment and our teacher, Anna Bedyńska, suggested we do a photographic report titled Moment.

I was visiting a friend in Gdansk, Poland, who was to be my subject for the photography assignment. She was at a crossroads in her life - she had just quit working and was suffering from health problems. However, in the end I wasn’t convinced that it would be good enough material to pass the upcoming exam. 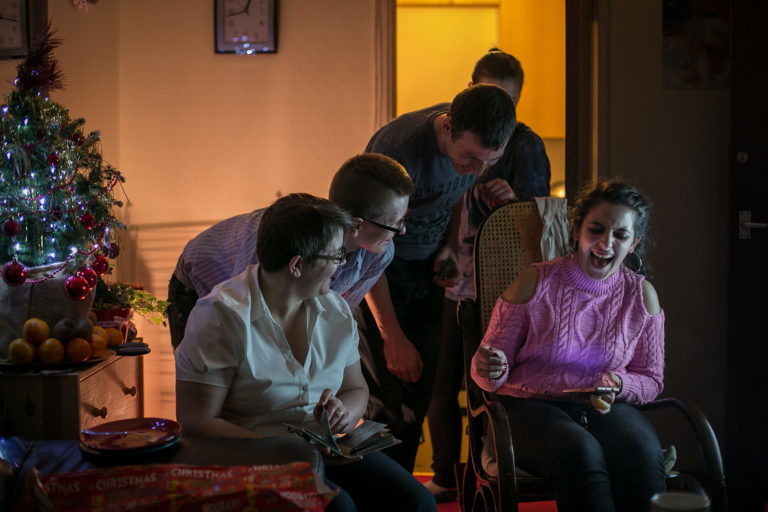 Then, I met her guests - Agnieszka and Honorata, along with Honorata’s daughter Natalia. I immediately felt at home in their company. They were warm, open, and we talked all day together. In those moments I experienced genuine honesty.

After all day Agnieszka, Honorata, and Natalia took a nap. It was then that I took the first picture of them. When I saw that intimacy I knew it was the ‘Moment’ I had been looking for. I had been so focused on the story I’d intended to tell that I nearly missed the real beauty right there infront of me.

The greatest lesson I have learnt during my work remains – look, listen, don’t hold onto expectations and have a lot of empathy. 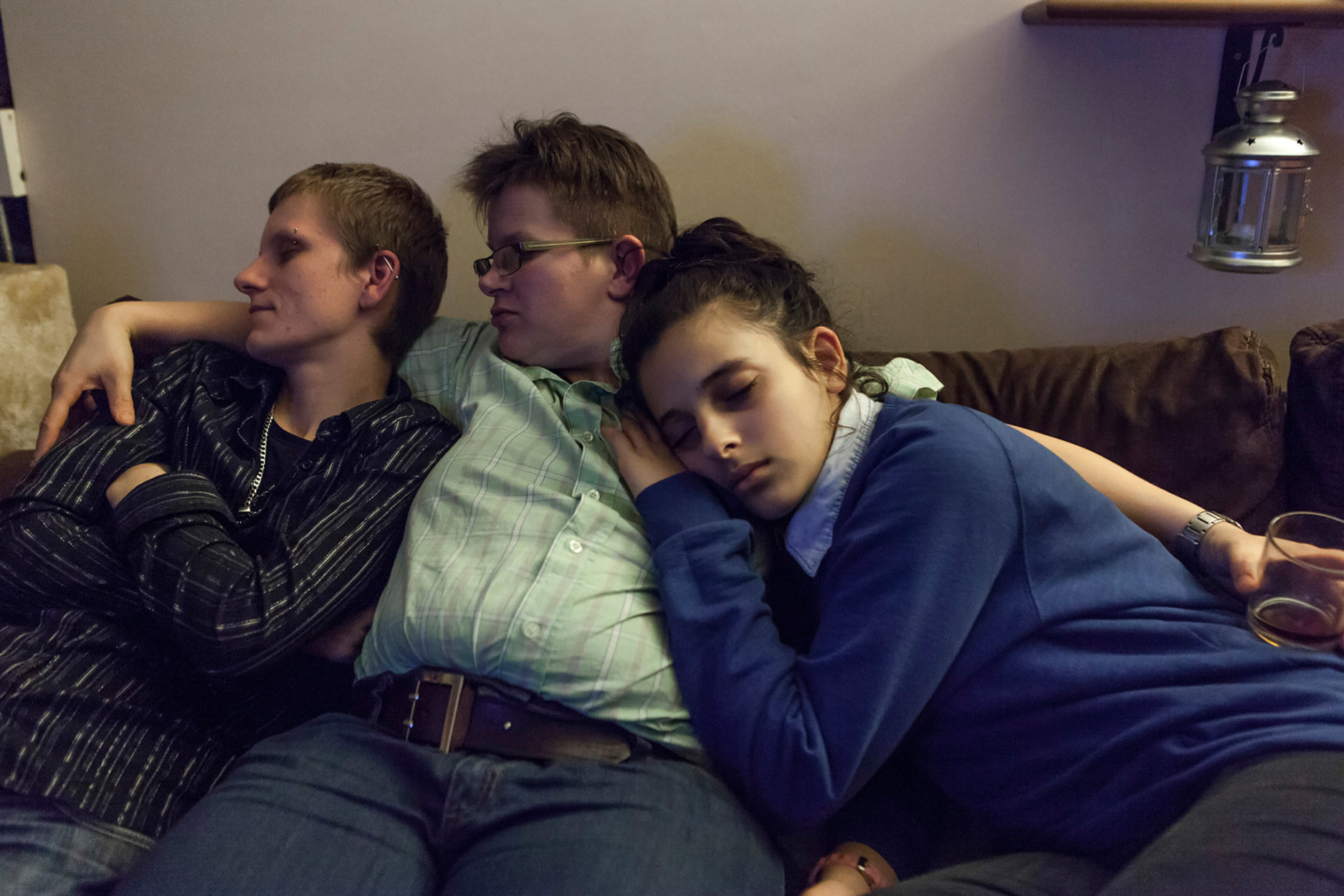 In your opinion, what does this project say about love?

What is love? Acceptance and support of the other. Agnieszka and Honorata have a good relationship because they both had a long and difficult journey to accepting themselves for who they are.

Honorata was shaped by the Catholic church. As a teenager, she was an active member of the church, and later studied theology. Honorata knew that she liked women, but she never had anyone to talk to. The only signal she got from the church when this subject appeared in anyway was - you have to sacrifice yourself.

Honorata began a session with a Catholic psychologist who was supposed to cure her of homosexuality. After the second meeting she got given her homework to go and do something good for herself. Honorata tole me; “I went and did that. I never went back to that office. It was the best I could do for myself. “ 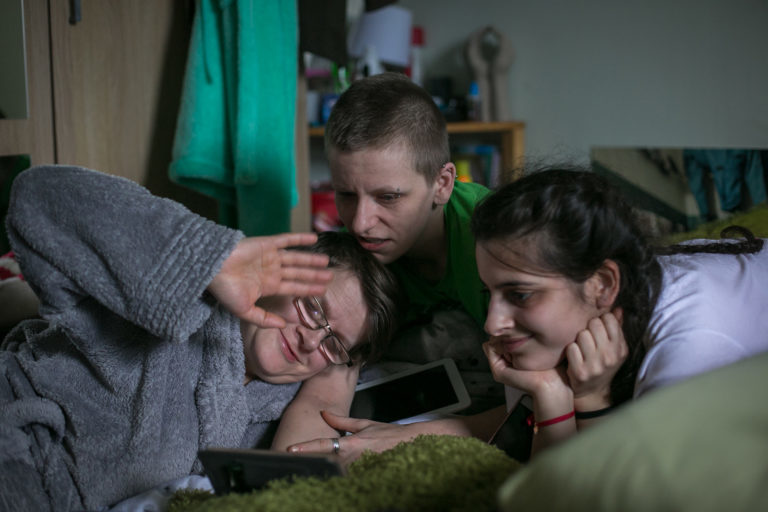 Later in her life there was a trip to the UK , a boy and a pregnancy. He didn’t want a child, although he wanted to marry. She stopped wanting anything from him, but decided to give birth and head back to Poland.

It was Natalia’s birth that gave Honorata the strength to free herself. ‘The truth will set you free’ is Honorata’s motto, and Natalia was raised into a great young adult – open, aware of her feelings and able to show them, without prejudice, using arguments in the discussion. 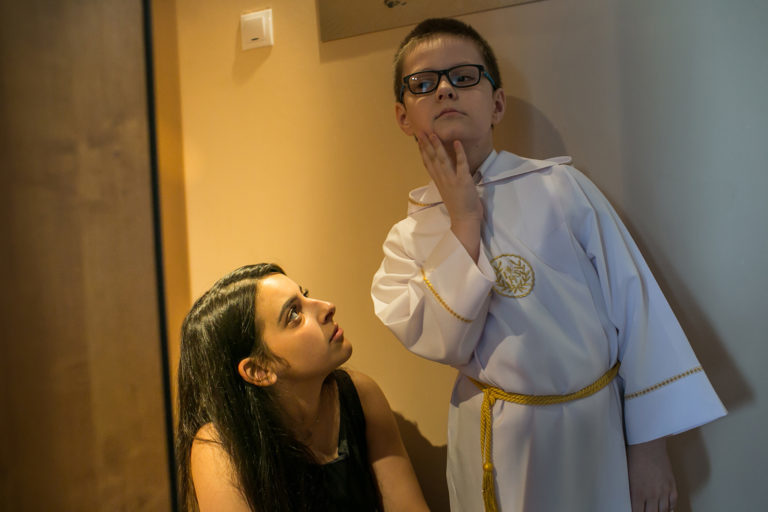 Agnieszka grew up in conservative family, however, her stubbornness, strength and persistent attitude made her parents accept Agnieszka for who she is. Just like with Honorata, there was a time when she tried to live with a man and have a ‘normal’ life, but she could not. Now Agnieszka and her family see each other regularly, and they have developed healthy family relationships.

What do you want your audience to feel when they see these images and does this change the way you take or select the photographs?

I am curating this collection of pictures so that the history can be understood - who they are, where they are from, what way they have traveled in their lives. For me, this is a story about the freedom of the individual and deciding who you want to be for yourself. 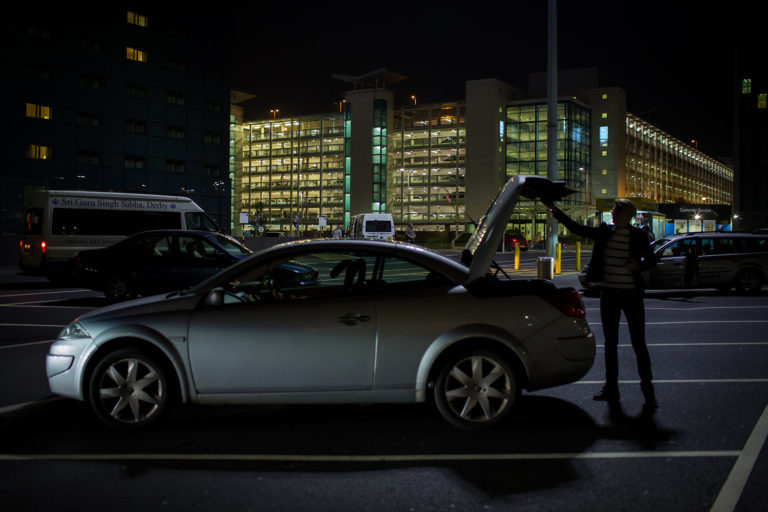 What is the significance of location in these images?

They moved apartments and changed cities, changed countries to looked for a good places for a dignified life. That’s why the locations are important. Maybe not excatly a locations, but ways to find good place, to live with dignity.

For me it is also a story about people looking for their place, where they can live with dignity, and that’s why location is important in the story. Everybody deserves a place, regardless of sexual orientation, ethnicity, gender. Despite it remaining difficult in many countries, such as Poland.

This story is about ordinary people, an ordinary family, and ordinary lives. Rather than illusory like that on social media. 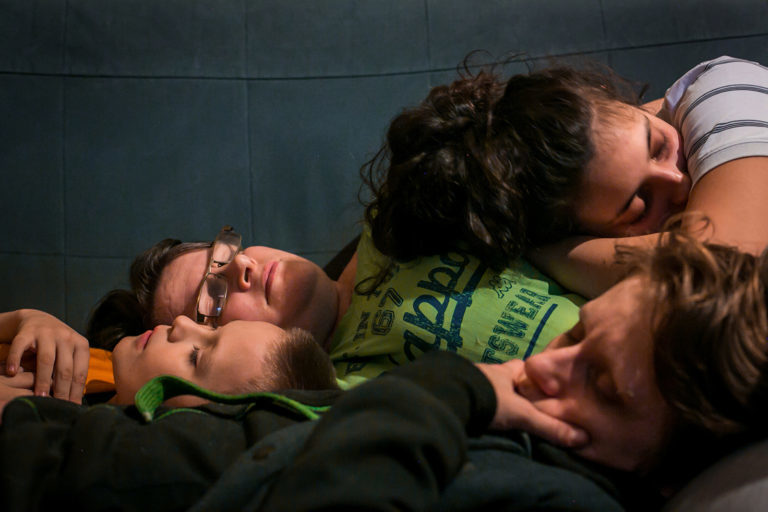 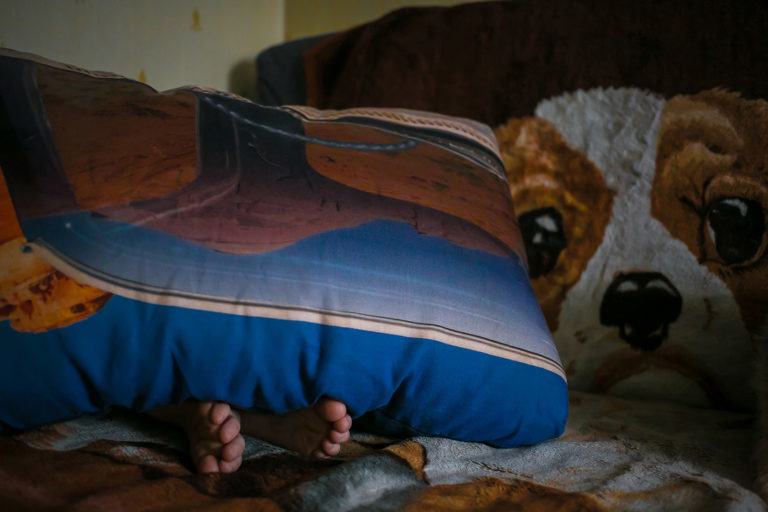 What is the significance of color in your images?

When I saw the colorful blocks in which they lived and the colorful walls in their apartment, I knew that the all project must be in color.

How often do you shoot with the family?

I try to be with them at important moments for them, like holidays, birthdays, communion, and moving homes. But I also want capture their ordinary days without special occasions. Sometimes twice a month, sometimes once every six months, but no matter how often I see them, we still keep in touch.

For example, on one occassion I got sick and had to cancel my flight to the UK to visit them. They sent me a photo of them cooking dinner and I joked that they should leave some for me for my next visit. After 90 minutes I got a delivery at my door from a supplier from my local bar in Warsaw, Poland, where I live, as they had ordered me to take away. 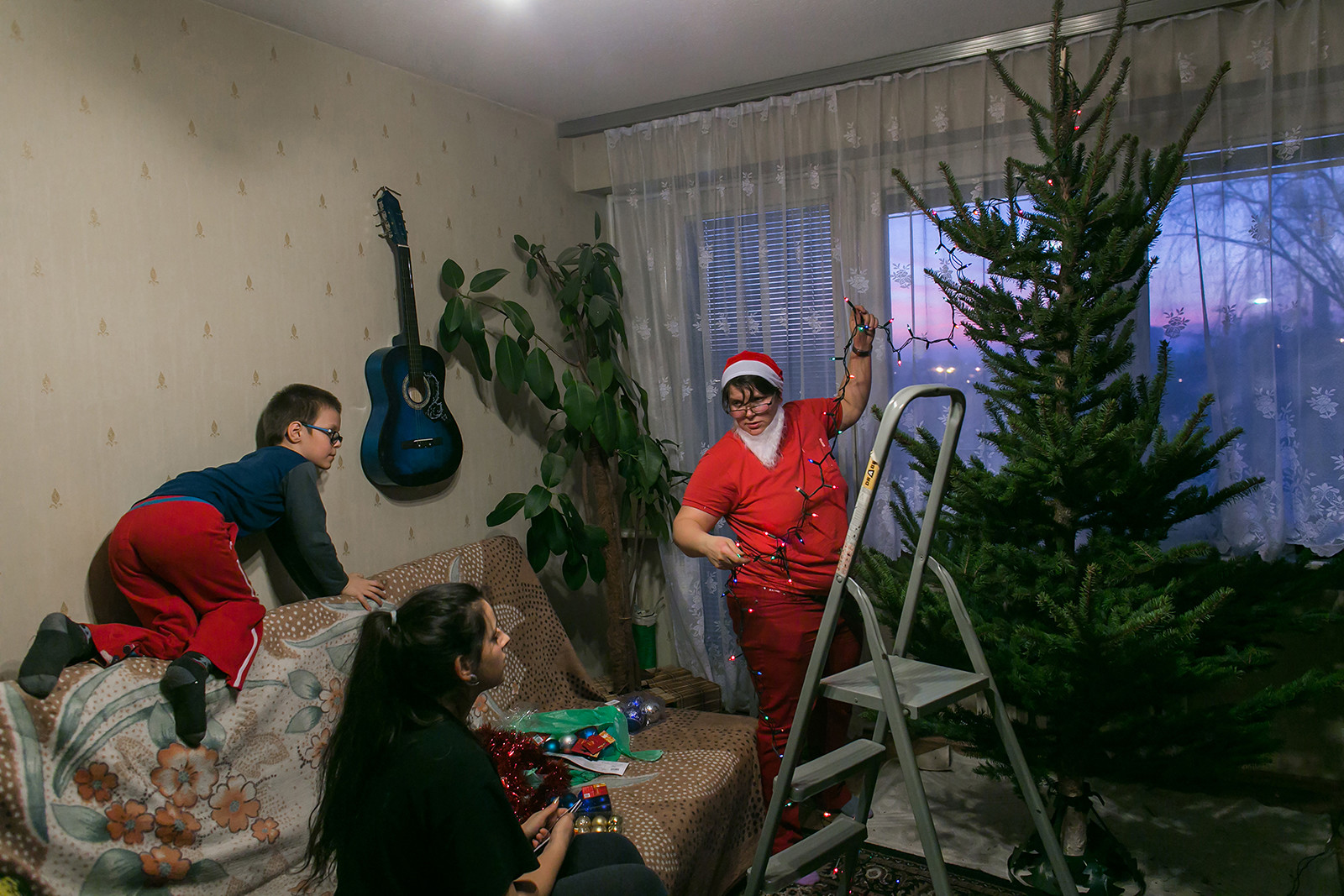 What is the biggest challenge you have faced with this project?

I would say that it’s not the biggest challenge, but rather the biggest dream. My hope is that the people who are important to Agnieszka and Honorata, will start to accept their relationship, their lives, and accept them. I would like to photograph the day that everyone comes togehter. 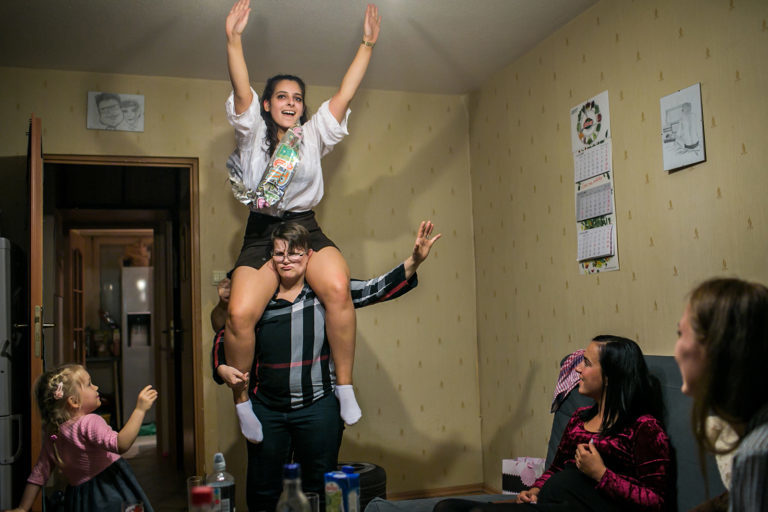 What is one image that will stick with you forever and why?

I have a lot of importatnt images in this project, but the one I consider the most impacting is the first one I took. In this photo I see a set of strong people, but also individuals who were full of empathy, open to others, natural, and full of confidence. 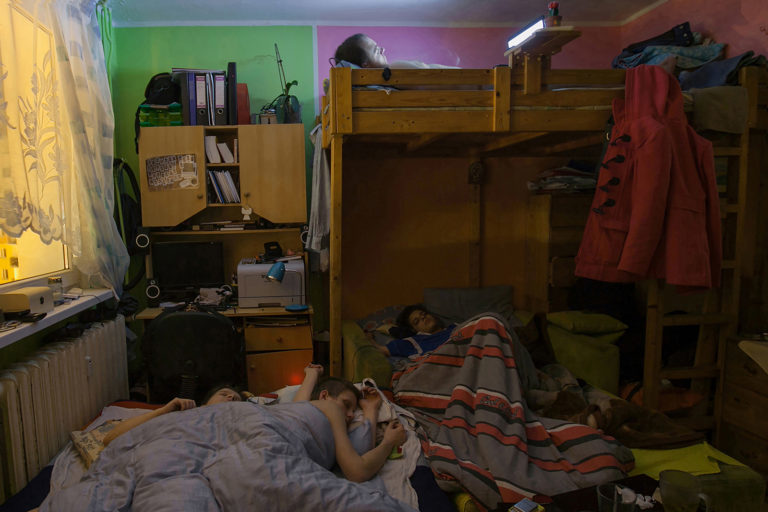 How do you aim to balance your own viewpoint and the authenticity of the family’s story?

First of all, trust and respect is essential. If you go to other people’s homes, you have to leave your ego at the front door. When you think only about yourself photographing, your hero becomes a subject, rather than a human being. As I am a guest in their lives, I leave with the responsibility to the world the real intimacy I have seen and experienced. 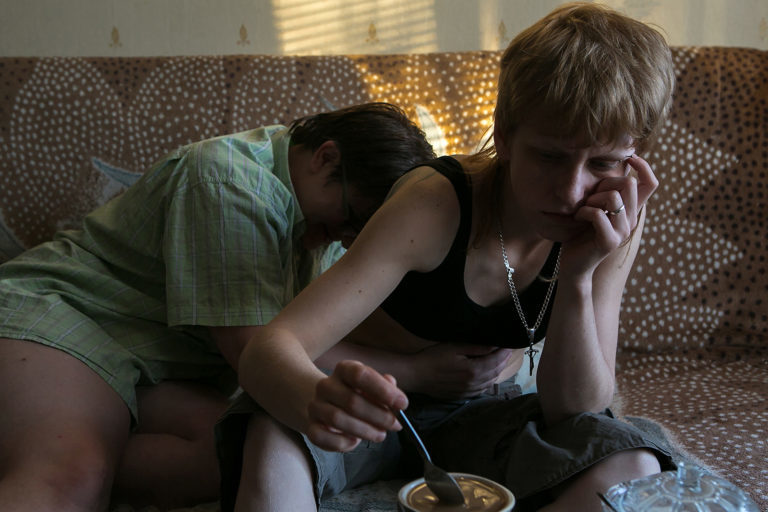 For some people, homosexual couples who are touching each other are already crossing boundaries of intimacy but it is normal for them! When I met them, Agnieszka, Honorata, Honorata’s daughter and Honoraria’s brother (above) were living in a small flat. They showed me that closeness is natural for them, and that with small spaces comes a place for affection – touching, hugging, kissing and intimate talks between mother and daughter.

Why do you feel this is an important love story to tell?

Because it is a story about love: self love - accepting yourself as you are for yourself, love for the other person, love that supports. In the end we all want the same things – to be accepted, understood, and loved. 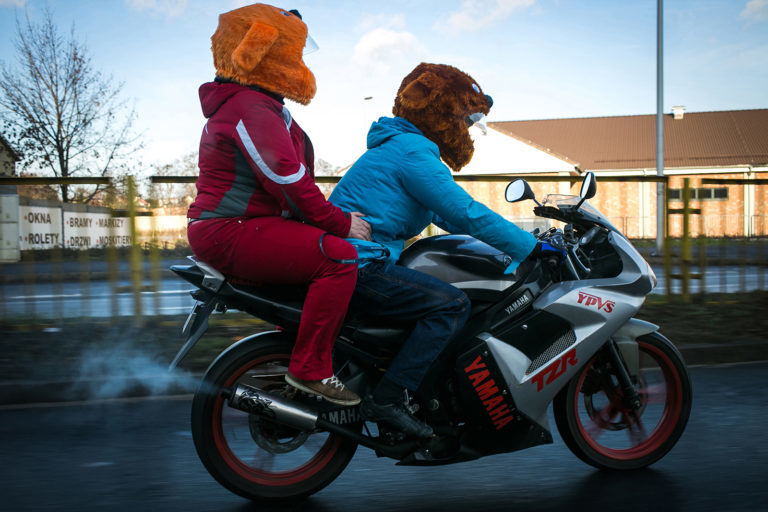 Want to see more about Anna’s work? Take a look at her online portfolio or follow along on her Instagram.